Intermittent Smashing: Bustin’ Through the Plateau

TL;DR — For 3 weeks (6 day cycles) I ate a metric fuck-ton of fat, some protein, and some safe starches for 6-8 hours per day, then I fasted for the remaining 16-18 hours. These were my results.

Back in February, I posted a nine-month retrospective detailing my experiences with a high-fat, low-carb diet regimen. At that point I had sought to prove (and was anecdotally successful in doing so) that not only does fat ingestion not make you fatter or unhealthier, but that the calories-in/calories-out model is an ineffective tool in augmenting body recomposition efforts.

In short: I ate a crapload of fat, exercised much less, lost a bunch of body fat, and gained significant muscle mass.

Even as I was writing that post though, I found myself in the midst of a plateau that had already lasted a few weeks. In all of the literature I reviewed, this was a commonly documented occurrence in very low-carb (VLC) diets. The subject would initially lose significant weight and then plateau after several months.

In light of that struggle, I decided to start a new experiment. This time, however, my intent was not to debunk any longstanding nutritional mythology (there are far smarter folks in the primal/ancestral scene already doing that to great effect). Rather, I wanted to see exactly how I could tune my body in such a way that I could become a paleolithic fat-burning machine again.

Enter intermittent fasting. My hypothesis was that I wasn’t spending enough time in deep ketosis, so my body wasn’t efficiently burning fat stores throughout the day (irrespective of caloric intake). In order to ratchet this up (read: to be in ketosis more often), I decided to narrow my feeding window to a 6-8 hour period. My approach was a hybrid of Martin Berkhan’s Leangains framework coupled with a high-fat, low-carb cyclical ketogenic diet. I decided to preserve my “Faturday” refeed (on absolute junk unfortunately) to make this experiment’s variable set more finite.

Note: I plan to write a follow up post on why I think the Tim Ferriss cheat day approach can be problematic — its certainly not ideal, but I am preserving it for the time being.

The science behind intermittent fasting be explained much better by Berkhan himself. The idea here is that the fasting would usher my body into ketosis quickly. Eating relatively low-carb (less then 50-75g per day) would keep me in that state throughout the week. Then on the seventh day, I would purposefully pull my body out of ketosis with a strategic refeed consisting of a high amount of carbohydrate intake; the purpose of which would be to replenish my muscle glycogen stores that were likely depleted during the week.

Now let’s break down my food and activity protocols:

My feeding window was typically from 3:15 AM (when I woke up) to somewhere between 10 or 11 AM. On the days that I exercised, I usually didn’t break my fast until around 4:15 post-workout.

Almost every morning, I broke my fast initially with a large cup of single-source coffee blended with grass-fed butter, coconut oil, and MCT oil. If you haven’t tried your coffee this way yet, you absolutely are a terrible person.

Breakfast consisted of a large steak topped with butter, baked sweet potato with garlic salt and butter, mixed greens, a smaller serving of strawberries and blueberries, and 3-4 strips of bacon. Note: all meat and butter was grass-fed and the bacon was organic and nitrate-free.

As a snack, I’d typically bring 5 or 6 hard-boiled eggs (pasture-raised) to work with me. I chose eggs not only for the taste and satiety, but for their superb nutrient density; not to mention that hard-boiling is super easy to do on a daily basis. I would also snack on a tablespoon of butter every now and again if I ever felt super hungry (which was surprisingly not often, more on this later).

My last meal of the day was typically one of two options. Most often I would have several cups of organic chili (grass-fed beef, onions, diced tomatoes, grass-fed butter, MCT oil) or this amazing paleo chicken broccoli cauliflower casserole I found the recipe for in this book. Protip: pureed cauliflower, when its cooked the right way, tastes better than any mashed potato recipe you’ve ever had.

On Saturdays, I would have my typical reefed day that I detailed in my last experiment with some nutritional modifications. More of my fructose came from fruit, I would skip the entire large cheese pizza occasionally (or limit to a slice or two), and I would stop eating much earlier in the day rather than continue snacking all night.

Alcohol, in the form of Bourbon, was still a staple of my intake for a few days during the week.

That’s it. I did my best to make sure I wasn’t calorically restricted by pushing my intake above 3000 calories on any given day. Some days I did eat less, but only in situations where I simply wasn’t hungry enough to eat what I had prepared.

To ensure I knew what days I had entered ketosis, I tested my urine every morning and evening with these ketostix.

Much like my last experiment, I kept my exercise level to a minimum. With the tertiary goal of maintaining muscle mass, I figured exercising 30-40 minutes per week would be sufficient.

My approach was to lift heavy twice a week for 15-20 minutes. 1-2 sets of 5 reps of dead lifts, bench press, shoulder press, and 60-70 two-handed kettle bell swings rounded out my workout. I had to abstain from squats due to some unrelated knee trauma that I sustained in March.

The only additional exercise I was conscious about doing was more walking. Along with the typical routine of walking my dog twice per day, I would take a few breaks at work to walk around the Seaport district in Boston where my office is located. Not surprisingly, the extra lymphatic stimulation throughout the day actually helped significantly with the swelling that resulted from my aforementioned knee trauma.

As you can see, I exercised very little overall which thankfully made overall compliance a non-issue.

Before I detail my results so far in this experiment, I wanted to share a few stats. Since the start of this experiment on April 14th, I have consumed approximately…

And I only exercised for about a half an hour per week — so I should be a fat sloth by now, right? I’ll let you be the judge.

Three weeks ago, my trailing weight average was 196 lbs. As of today my trailing average is 192 lbs. In the same span of time I lost 1.5% body fat, mostly around my visceral region it seems. Here’s a full body shot of my progress (pardon the shameless bathroom selfie): 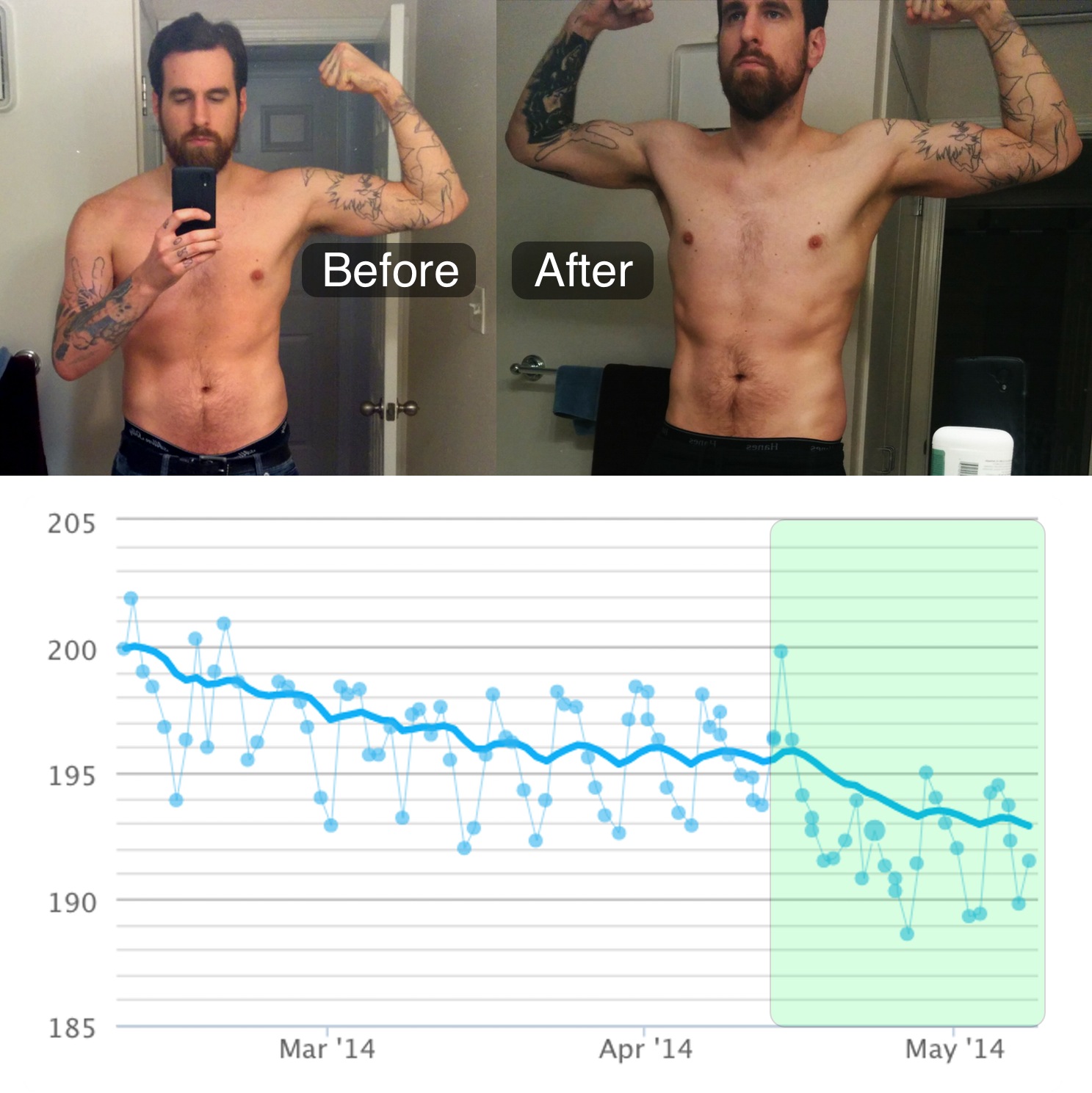 As you can see, I leaned out significantly around the midsection and from the looks of it, the autophagy never led to complete catabolism. I did this without consciously cutting calories and eating large amounts of fat. Can we finally put the “saturated fat is fattening and evil” fallacy to rest yet?

I found fasting to be uniquely liberating insofar as the way in which it helped me break free of this compulsion of needing to eat every 2 hours. That may have been the most important skill that I gleaned from this entire experiment. If you try this for yourself, you will quickly realize that the "hunger" feelings you are so accustomed to reacting to on a daily basis are very much a purely mental phenomenon and not borne of any discrete physiological symptoms. Real hunger is very rarely experienced when you follow this protocol (in my experience at least).

With that said, I’ll be cycling off this protocol for a while due to well-documented concerns of adrenal fatigue from long-term fasting regimens. These concerns mostly stem from the consequent rise in cortisol levels that result from being in a fasted state 5-6 days per week. You can mitigate this effect by cycling off the protocol for periods of time.

I realized after completing this recent nutritional deluge that I don’t really need to be in ketosis all the time, it’s just nice to know that getting into deep ketosis doesn’t present the same challenge as I experienced during my recent plateau. I just kick into a fast with less than 20 grams of carbs and boom, ketosis in 1-2 days. I view this method as another tool in my arsenal to augment my greater goal of ultimately becoming a human better adapted to burning fat as its primary fuel.